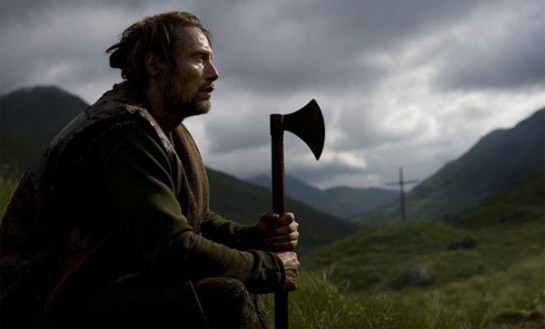 Every so often you come across a film that is so bonkers in its premise that it has to be watched. When that film lives up to the premise but still manages to be intelligent, thoughtful and near enough a work of art it comes as a surprise – step forward Valhalla Rising, the only Viking versus Native American film you will ever need.

Seriously, this is Terrance Malick’s version of Pathfinder.

A lone warrior is held captive by a group of slavers who force him to fight to the death. Escaping from his captors he meets a group of Viking pilgrims bound for the Holy Land on a crusade and joins them only to get lost in a fog and end up in the New World where they are picked off one-by-one by the native population.

Not crazy enough for you? Okay, he’s a mute who has visions that are interpreted by the young lad who follows him around. Oh, and he thinks he’s from hell, knows where they are all actually headed and is looking to die.

It should be absolute trash, but somewhere along the way the director chose to turn this into a glacially paced contemplation on death rather than a hack and slash Viking film. Much of the story is presented merely in the facial expressions of Mads Milkessen as the mute warrior at the centre of it all. Far from the civility of his most famous role in Casino Royale he presents the possibility that he may have been born in the wrong time period. It takes guts for an actor to attempt something like this and he should be given all credit.

One surprise is the choice of music, strange ambient electronica would seem an odd choice (and it is) but given everything else abut the film it feels right.

So, heartily recommended – even of the poster makes it look like a bad 300 rip-off (it isn’t – in fact it’s as far as you could get from that film).