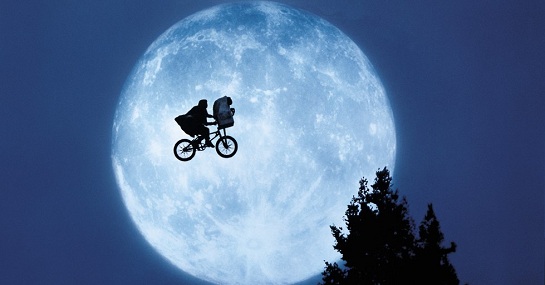 As much as I complain about the state of modern film, in particular the general dumbing down of summer movies into market led exercises, it’s hard to sometimes fault their entertainment value. Occasionally, just occasionally however they are something else entirely, sometimes they just happen to be as close to perfection as possible, delivering a sense of something else other than mindless entertainment alongside you popcorn. Sometimes it’s a sharp social commentary, sometimes it’s a clever use of the genre, but sometimes it’s just that they create a sense of belonging to something that other films cannot even begin to achieve. ET is one of those movies.

It’s easy to dismiss it as a kids film, but if the truth be told that’s the reason that it is so effective – ET reminds everyone what it’s like to be a child, that the world is a scary, strange place but that it’s easier if you’ve got a friend. At the very core of the film is the notion of friendship, not only between Elliott & ET but also the friendship that he has with his brother & sister. Yes, he argues with them, he occasionally bullies his sister but there’s also the sense that when things go wrong (and this is a film in which a lot goes wrong) they’re the people who’ll look after you. It’s a film that restores your faith that people are for the most part decent, caring individuals who don’t want to see people hurt, and it’s that which produces the emotional gut punch come the end. The tears aren’t because the titular character is leaving; we just don’t want this lonely little kid that we’ve grown to love be hurt by the experience. Despite its slightly fantastical nature this is a film grounded in humanity.

Which brings me to the principal strength of the film – Spielberg somehow managed to coax possibly three best child performances out of his actors seen. These days we seem to be inundated with good child actors, but there’s always the sense of performance about them (to me at least). Here it feels more natural, less forced, as if the actor’s personality is being allowed to bleed through. There’s no smart talking, no sense of them being old before their time, just the sense of them being kids. Everything is filtered through the perspective of a child, the camera even shoots at their height even when not focusing on them. Sure, there are the cute touches (the scene in the classroom during the dissection is what a child thinks a kiss should be) and with a child’s perception of popular culture being the same as real life. None of them would go onto deliver anything else close to as good as their performances in this film, and whilst Spielberg would gain a reputation as one of the best directors of child actors (if not the best) he’d never quite reach these heights again. Even the smallest child parts feel fully formed in terms of what we need to know about the character, and all the adults are viewed as if by a child (especially the mother, Dee Wallace gives a marvellously unselfish job of making the kids the focus).

The other key performance belongs to a special effect. I often complain these days that films are designed around showcasing an effects reel, but here this isn’t the case. A clear example of how physical effects can still outclass CGI (even when we can see the join), ET himself is a wonderful creation, an ugly little bugger that moves around in a jerky fashion because that’s the limitation of the effects, but is all the more effective for it. Like Yoda, all of the focus is placed on the eyes, and like Yoda, CGI would later rob him of the loveable home-spun nature. ET is another film that didn’t require digital tweaks later, and even Spielberg himself has admitted this, imploring people to look back at the original as the definitive version of the film. There’s an old fashioned, hand built quality to the film and very little other than the end in the way of spectacle. Despite all of this it’s one where images have become part of common language, whenever there’s a joke about a bike going out of control you can be sure they’ll shoe-horn in that image of it flying across the moon. The healing finger, “Phone home”, it’s all become part of our culture. ET doesn’t need to be high tech, the effects aren’t the focus, they’re just a means of telling the story (something that clearly separates Spielberg from his closest contemporary Lucas).

There’s the sense that everyone wanted to deliver their best with this film. John Williams turns in one of those scores that takes you instantly back to the film (and the emotions) after hearing two notes. It heightens the emotion considerably, but when you go back and look at it it’s the quieter moments that are more effective, the moments in the forest at the beginning, the domestic scenes. Sure, it packs a heavy emotional wallop come the end (it’s almost a relief when it fades into the piano solo for the credits), but that’s because of the leg work it’s done earlier in getting there.

Whilst many of the films on this list may offer a dim view of humanity, it’s hard to be cynical about a film that offers such a positive vision of humanity. Even the government agency (the closest this film comes to a villain) are motivated by curiosity rather than fear, and recognise the impact that the death of a close friend has on a child. Some of accused it of being emotionally manipulative, but the truth is that it’s not afraid to wear its emotion on its sleeve (as much as the complaint that Spielberg can be overly sentimental, sentimentalism is not a failing here); it’s a small tale told simply & economically that the world just happened to fall in love with.