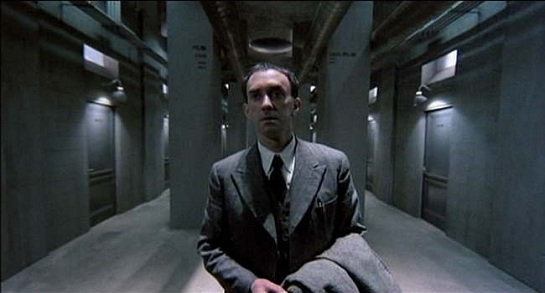 Massive studio fights regarding the ending, mired in red-tape over which version to release (eventually leading to Gilliam taking out a full page letter in the trade press requesting that he be given the final cut) and since released in numerous conflicting versions, the production of Brazil mimics the bureaucracy that the film so effectively satirises. Billed as 1984½, it’s a curios example of why the best people at looking at Britain (even a far future, dystopian version of Britain) are often foreigners (in this case an American).

(To explain the last bit further – I often comment that films about Britain and British Society are often better when made by and outsider because they don’t feel the need to either downplay the issue or make it appear to be a cute eccentricity, as an example watch Ang Lee’s version of Sense & Sensibility to see that a dispassionate eye is sometimes better. Watch anything by Richard Curtis for the opposite side of the argument…)

Brazil is a curious film that I find easier to admire than like. The first thing that strikes you about it is the production design – indeed, it is so overwhelming that it usually takes a few viewings to get past it – as Gilliam & Co. create a vision of Britain where red-tape has become the de-facto answer to everything. The government doesn’t oppress the nation as a means of controlling them, it just wants to make sure it ties up completely with the paperwork. Unlike 1984, this isn’t a vision of Britain under Stalinist rule; it’s a vision of Britain where the national character has been taken to the logical extreme. Eventually though, you begin to look beyond the surface design and note that underneath all the design beats a rather wonderful (if not an easy to watch) little film.

Key to this success is the casting of Jonathon Pryce as the everyman hero (in the loosest of sense). He’s not a Winston Smith, fighting against the machinery of the state, he is the machinery of the state, or at least he is when he isn’t day dreaming of a life outside of the ministry. Crucially the film does not end with the state triumphant in destroying his soul, only his body. Gilliam’s argument is that you can break a man but never his dreams. Pryce shows a flair for light comedy (and it is a comedy, albeit a pitch black one) that occasionally resorts to slapstick as well a verbal dexterity, without appearing to be part of the joke. His everyman is played as straight as possible because that’s what the film demands. Everyone else can be as crazy as they like, we need to be able to connect with him and more importantly see everyone else as crazy for ignoring the truth of what is going on. I can’t really think of a film in which he’s been quite as effective as this, partly because I can’t think of a film that has utilised his strengths in the same way, that slightly brow-beaten figure (and his relationship with his mother is lifted directly from Ealing).

So the film throws in memorable turns from Robert DeNiro as the terrorist plumber who may be the cause of all of the problems (and the film clearly has him referred to as a terrorist – how many films would be brave enough to have a hero identified as that these days?), Ian Holm as his boss – the sort of man that many of us know who have been promoted to management to limit the damage they can do when they actually do the work and most memorably Michael Palin as the smiling executioner (I wish that more films had made use of this aspect of him, he’s since turned into almost a favourite uncle when he could have been something more fantastically creepy). The only possible weak point is Kim Griest as the object of Sam’s affections, although this may be because she’s the focus of his dreams rather than a fully fleshed out character (and knowing the reality of who she is may break the spell). Once again, everyone plays it deadly straight because they all know that it’s more effective that way, especially given that the strength of the ending relies on us not quite being sure when the fantasy becomes the reality for Sam.

Despite its near disastrous beginnings (at one stage it looked like it would never be released) the film has proven hugely influential, although few films have been as successful at bolting the aesthetic to as coercive a narrative. Only last year the otherwise horrendous Sucker Punch lifted the Samurai Demon image almost wholesale, and the type-writer / monitor combination has become a staple of Steampunk design. It’s not just the technology, there’s something slightly Giger-esque about the location of the final screen and the malevolent baby mask, whilst the plastic surgery (in particular the parts when it goes horribly wrong) are a clear throw-back to earlier Python.

For me, only Fear & Loathing in Las Vegas comes as close to being a perfect film by Gilliam, and the advantage there is that it has the acidic prose of Thompson to draw upon. Brazil is much more his own film, and whether it can subsequently be read as indicative of his relationship with the film industry (he clearly has no luck in getting films made) is perhaps over-egging the pudding. Its’ difficult to imagine any studio letting a director loose on a project like this these days without a prior franchise or source involved (the closest is possibly V For Vendetta, but that’s cut from a very different cloth) to point the accusatory finger at when the public baulks at the subject. Brazil should be applauded not only for it’s inventive visuals, but for being brave enough to not shy from the word.