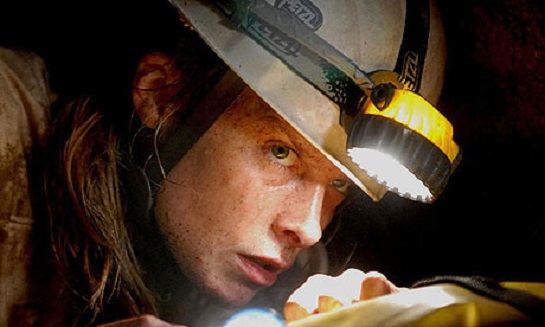 Why isn’t 28 Days Later the best British horror film of the decade? Quite simply because this is a genuinely terrifying film that actually remains scary despite multiple viewings, never quite losing the initial grip it had on you (something increasingly rare in horror these days – only Halloween gives me the heebie-jeebies like this. What begins as a tense thriller drama mutates into an old fashioned monster movie (with just enough of an indication that this is a possibility in the beginning to keep the interest). It’s testament to Neil Marshall’s skills at cranking up the tension that it comes as something of a relief when the monsters do finally turn up and begin to play havoc with the cast, at least then the likelihood of more horrendous caving accidents is reduced. This is not a film for anyone who suffers from claustrophobia.

The film works because it works with the most basic of human fears – the dark, and what may (or may not) be in it. A group of women meet for an annual anniversary / bonding exercise and go pot-holing. One of them is recovering from the death of her husband and child in an accident (and it is strongly suggested that another of them may have had an affair with the husband in the past), another prone to taking a few too many risks. Over the course of the film what should be a routine trip becomes something else, accidents happen, tension rises amongst the group and there’s a distinct possibility that no one will emerge from the cave alive.

And then monsters turn up and begin to tear people apart.

Even without that last fact The Descent would be a highly effective shocker, albeit one whose focus lay more in creating drama rather than sheer terror. It reminds me very much of The Thing in that it takes time to establish its characters (without necessarily making you care about all of them) before throwing adversity at them – the simple truth is that we need investment for films like this to succeed. It’s also unusual to see such a female focussed film as well (the sequel, a clear case of diminishing returns would somehow dilute the formula by adding men), especially in this genre (although it’s arguable that horror fares better than most, although how much of that is because for the damsel in distress trope is questionable). Like The Thing is also relies on physical effects for its monsters, there’s a physicality to the attacks that could not be achieved with computers, indeed the only artifice are the caves themselves, created on a soundstage for safety reasons. The film feels like a throwback to the late seventies – it almost needs a lurid faded VHS cover to complete the image.

For me it’s the only really effective jump-shocker of the last decade, partly because it marries its jump scares to actual scares. Too many horror films became a diluted series of sequences designed to create a false jump, a real jump and then resetting for the same again without delivering on what created the scare. The Descent doesn’t fall into that category, it makes you jump and then build on that, it doesn’t cut away for reasons of certificate (how many anaemic horrors must we sit through these days?), realising that some films are better when pitched above a teenage audience. In recent memory only Kill List is as purely visceral as this, albeit far less pitched at the mainstream.

Which is why The Descent makes the list, a small scale shocker, pitched at a mainstream audience but with enough about it to appeal to the more hard core horror crowd, the only thing that separates it from the high watermark of the seventies is the lack of social commentary (although that could be that I’ve never seen one), but that’s something that’s so rare these days that it’s often not worth noting its absence. It’s a throwback to film-making of old whilst still feeling modern, something that I’m increasingly drawn to in films these days, but most of all it’s still properly scary. It’s certainly Marshall’s best moment as well, truth be told I’ve never really been a fan of Dog Soldiers and his post-Descent films never really lived up to this (although his work on Game of Thrones showed he may have better luck with adaptations), but this is an almost perfect example of the genre; nasty, brutish and short.