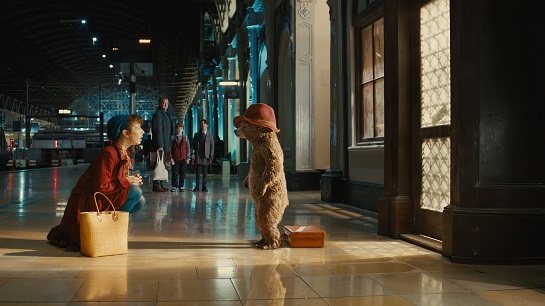 It’s a bizarre topsy-turvy world when the best film I see over the Christmas period isn’t the Middle Earth related one but the start of the franchise that I really wasn’t sure about – Paddington. Far from being a saccharine child focussed endeavour there’s a genuine warmth to the whole film, a real dollop of humour (just the right side of risqué at times to appeal to the older audience members), terrific acting from all involved and some of the best animatronic / CGI characterisation for a long time.

The films slight running time belies how much it manages to cram in, the film doesn’t at any time feel like it’s an episode stretched but rather something that’s been lovingly crafted to be both an updating and homage at the same time. It certainly helps that it’s all fronted by people who have an understanding of slightly whimsical comedy (both the director and actors) and that the titular character is realised as not quite real, not quite fake (and wonderfully voiced by Ben Whishaw – a far better choice for a young idealistic bear than Colin Firth would have been). It’s also very British in its humour without falling into the Richard Curtis mode of being overbearingly cute, in fact the closest film I can think of to describe it in tone is Fantastic Mr. Fox in that it plays as a comedy of manners.

It’s the little touches that make the film – the Brown’s house opening out as a doll house for us to see what everyone is doing (another Wes Anderson like touch), signs in shops telling us the plot (and leading to a fantastic London Underground joke) and everyone just going along with the fun. There are more gentle jokes in the background of this film than some outright comedies throw at the screen, but it never feels overbearing (although the opening joke regarding the source of Paddington’s Aunt & Uncle’s names nearly killed me). There’s a real sense of craft to the film, as if no aspect has been too small not to give proper thought to it.

Best of all is Paddington himself, not a photo real bear by any means but one created to be on just the right side of the uncanny valley to be part stuffed bear, part informed by the real thing. He’s one of the few CGI characters that seems to have a genuine sense of weight (rather than the float-y fabrications that often grace films), obeying a set of laws rather than constantly breaking them. I’ve often commented that CGI succeeds or fails on the ability to believe that the creation is genuinely integrated into the world rather than being separate from it, and with the lead character being such a fabrication it was especially important to get it right here. Thankfully it’s a roaring success (no pun intended).

I cannot recommend it enough – whether it requires a trip to the cinema is debatable – but this is one of the best family orientated films to come out for a long, long time.