So, this is the first Plague Marine Squad, and generally I’m happy with the results. Happy, does not mean fully finished, although apart from two slightly larger jobs here, there’s a lot less painting required here. 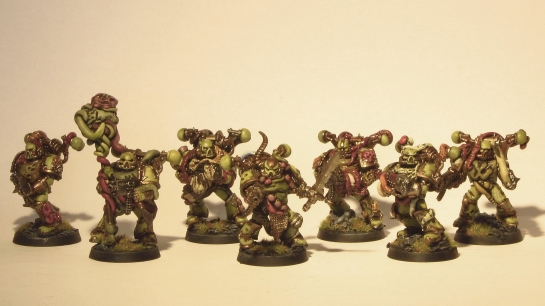 The plan is generally;
– Some texture to the paint job, make it a little less flat. Not as much as the Malignant Sorcerer though.
– Dullcote varnish to flatten the model, then gloss on the exposed organs for effect.

Two models require a little more work though. When I first started this, sources of special weapons were difficult for a fluff based army, but the number of troops that can carry them now has increased.

Blue Arrow;
– Replace the existing “bodged” Plasma Gun with an actual Plasma Gun. So this will be a weapon swop and then cleaning up the model / paint afterwards to match the rest.

Red Arrow;
– This is the Plague Champion of the squad, so replace the existing Bolt Pistol with a Plasma Gun, then as per the Blue Arrow.

You can’t go wrong with three Plasma Guns in a squad really, and it’s a bit more punch, something that the army lacks at the moment really.