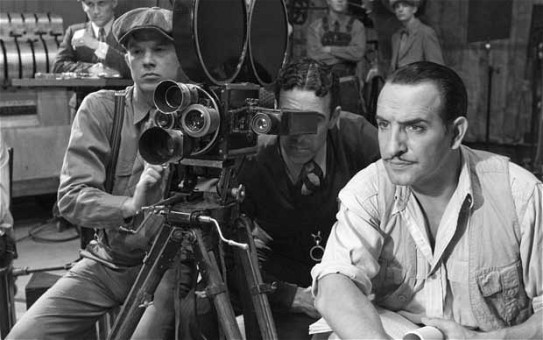 It’s faintly ironic that after a year in which all of the best films were the miserable ones (as good as The Tree of Life / Melancholia / Kill List and Senna all, they were all pretty miserable for much of their time) that the best film of the year should be a near-silent romantic comedy, shot in black & white with few recognisable names and a director who’s back catalogue hasn’t really been seen outside of France. That The Artist is drawing so many plaudits is all down to one thing – it’s rare that we see such a labour of love on the screen, and even rarer that it becomes so infectious that you can’t help but be smitten. It’s the sort of film that makes you laugh, cry and then laugh & cry within its brief running time, all capped off in a fashion that is note perfect and leaves you beaming about it for days afterwards (SJ & I couldn’t stop recommending it to nearly everyone we met afterwards). I’m sort of glad that I’ve seen it before any of 2012’s releases as I’d otherwise be comparing every film to it, I probably still will.

END_OF_DOCUMENT_TOKEN_TO_BE_REPLACED

Once you get past the point that SHGOS has very little Sherlock Holmes in it, there’s a great deal of fun to be had from this piece of nonsense. It’s one of those rare films that is good because you know that everyone involved in it had a blast making it, and that sense of fun is projected onto the finished product. Like I said, it’s not really Sherlock Holmes (if anything its Bond: The Steampunk Years), but it has enough familiar beats to be great fun from start to finish.

END_OF_DOCUMENT_TOKEN_TO_BE_REPLACED

Boxing Day saw the release of probably the most unlikely Festive film ever, a decision that can only really be put down to the studio’s insistence that it be lined up ahead of the awards season. It’s unlikely to score big (although I suspect that I can predict where nominations will follow), but it does mark another point in the career of former rabble-rouser David Fincher.

END_OF_DOCUMENT_TOKEN_TO_BE_REPLACED

I saw Tintin a couple of weeks back, but time hasn’t really allowed me to comment on it before (besides, there was an element of public duty in warning people about The Thing). This weekend I went to see Hugo, and it got me thinking about how the careers of probably America’s two premier directors have diverged since the beginning.

END_OF_DOCUMENT_TOKEN_TO_BE_REPLACED

Friday night saw me drag myself to the cinema for a late night showing of The Thing, the sort of prequel to, well, The Thing (although most people think of that has John Carpenter’s The Thing, so they’re not counting on false advertising). Two hours later I emerged decidedly pissed off having seen an absolute travesty of a film that jettisoned everything that was good about the original remake (I can never remember if it’s the first or second remake of the Hawks film) in favour of the all that is unholy in modern horror.

END_OF_DOCUMENT_TOKEN_TO_BE_REPLACED

Immortals presents something of a mixed bag to the viewer. On the one hand it could be viewed as an attempt to produce another crowd pleaser in the style of “300”, firmly financed with the multiplex crowd in mind. On the other it’s slow pace, bizarre visual style and lack of clarity could put a lot of viewers off. I sort of liked it, but admit that it wasn’t quite the film I expected.

END_OF_DOCUMENT_TOKEN_TO_BE_REPLACED

Melancholia is a difficult film to discuss without taking a look at two other recent films as well, firstly Trier’s own “Antichrist” and Malick’s “Tree of Life”. With regards the former it continues the directors trend into telling stories about depressed women coming to terms with their lives and impending disaster, whilst offering the latter’s grand visions on a cosmic scale as a means of exploring the human condition. Like both, it offers a viewing experience about as far from conventional modern film narrative as possible and a glimpse of the possibility of what film can achieve, although unlike the former it is far less a gruelling experience this time and a far easier proposition to watch.

END_OF_DOCUMENT_TOKEN_TO_BE_REPLACED

A couple of years ago when Paranormal Activity first came out I commented about the influence The Blair Witch had had on modern cinema. The Troll Hunter uses a similar device (pretending to be found footage edited into a documentary) but rather than for horror purposes it instead is one of the funniest films to get a cinema release for ages. Imagine if Ghostbusters was in Norwegian and as a documentary and you’ll get the idea.

END_OF_DOCUMENT_TOKEN_TO_BE_REPLACED

Occasionally along comes a film that is so far from your expectations of what it is going in that afterwards you can’t help but feel disorientated. When this turns out to be the director’s prime intention the feeling is compounded. Welcome to Kill List, for me probably the most interesting film of the year by a significant margin. Be warned however, you won’t enjoy your stay.

END_OF_DOCUMENT_TOKEN_TO_BE_REPLACED

Drive feels like a throw back to another time, one when films were willing to take more risks and be far less sanitised than they sometimes appear these days. A distinct “guilty pleasure” (at its root it’s pure pulp) it rises above what could have easily been a small scale direct to DVD endeavour to something else by virtue of a top-notch cast and an off-kilter presence. For my money, it’s probably one of the highlights of the year film-wise, but it’s just as likely to leave people cold as well.