I’ve had less time this month for painting as work has ramped up in terms of requirements (which is a good thing), but I have been able to complete my second Malignant Plaguecaster which means I can now field a legal (if inefficient) Battalion. The build up is;

Once again I kitbashed a combination of Chaos Marine and Terminator parts, but this time I made the base a little less prominent so that the other Plaguecaster has the edge in height (to denote it being the Warlord). 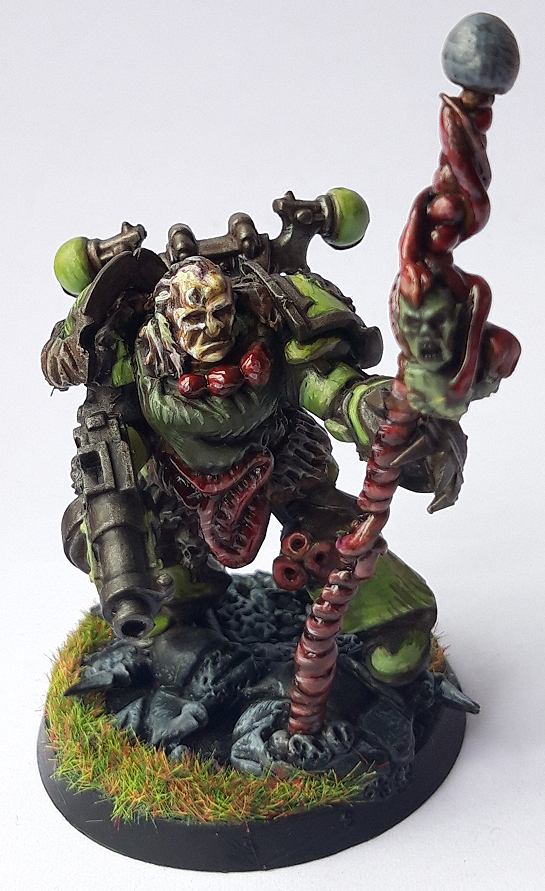 Next up is completing the next fourteen Cultists (I’ve restocked on green stuff), and then maybe some more Dreadnoughts, but at that stage I’ll be able to perhaps look at other options as everything will be new on the table. I do need to pick up some more movement trays at some stage, but that’s a bit down the line.

I’ve had a burst of productivity, finishing off a few jobs and bringing everything that was currently on the table up to date. First of all was finishing off the Dreadnought, changing the close-combat arm and re-painting for more texture. I’m happy with the results, I think the arm look a lot better than it used to, and the large areas of flat panel have been broken up. I’m stuck on the matt varnish / gloss elements look now, again I think that it really helps create the right look of dry, rusting bodies with the innards spilling out. 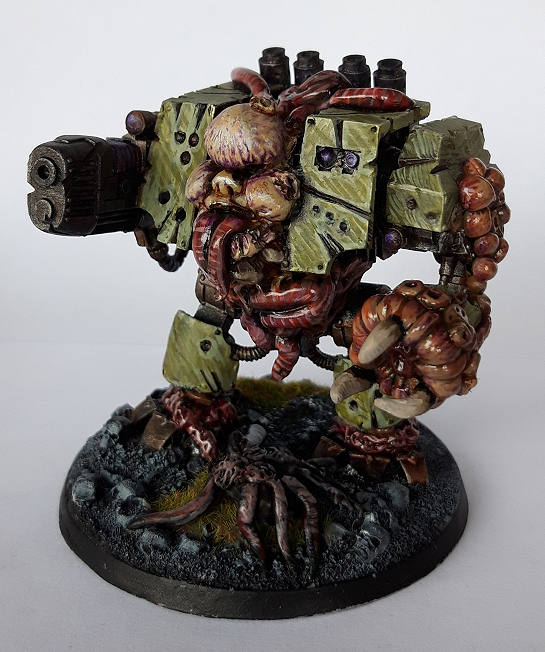 END_OF_DOCUMENT_TOKEN_TO_BE_REPLACED

I’ve taken a few weeks break to work on another project for Sj, but today I decided to start taking a look at a previously “completed” Dreadnought that I had sitting around. Eventually I’d like three of these, but at the moment it’s more about bringing it up to the standard I’ve started to feel the rest of the army now is.

END_OF_DOCUMENT_TOKEN_TO_BE_REPLACED

Painting has been completed on what will eventually be a great big blob of twenty-eight Cultists to walk in front of more important stuff, hopefully soaking up incoming fire from all quarters and dying quite easily. 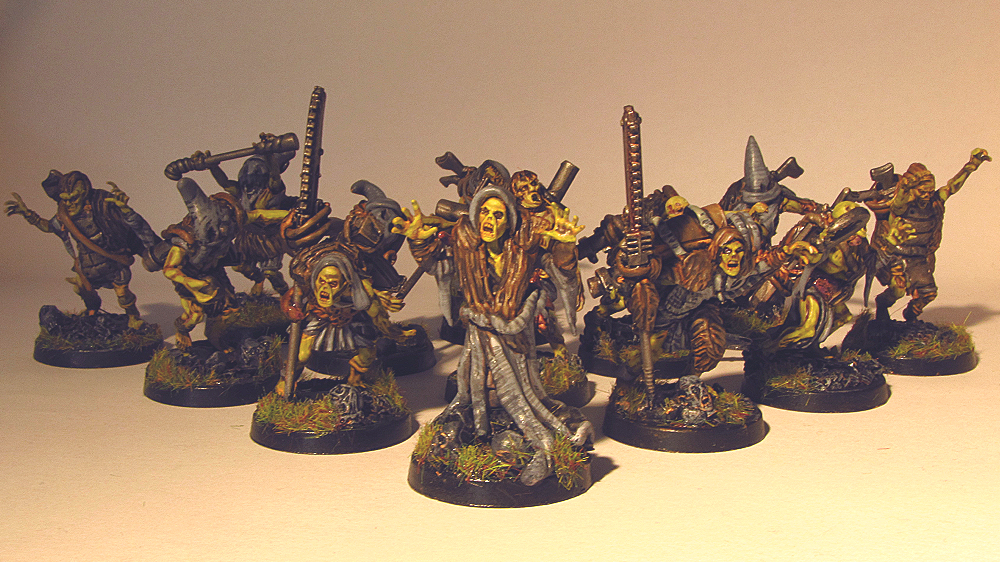 END_OF_DOCUMENT_TOKEN_TO_BE_REPLACED

So I’ve finished building the first half of what will be eventually a blob of twenty-eight Cultists to act as a meat / cannon shield and keep the hard hitting stuff shielded as it trundles across the table. I’ve tried to make them as generic Nurgle as possible, so they can double as Pox-Walkers as well by doing things like stowing their weapons across their backs and giving them a dishevelled / plague look through the use of a lot of green-stuff (seriously, I’ve depleted well over two thirds of my store). 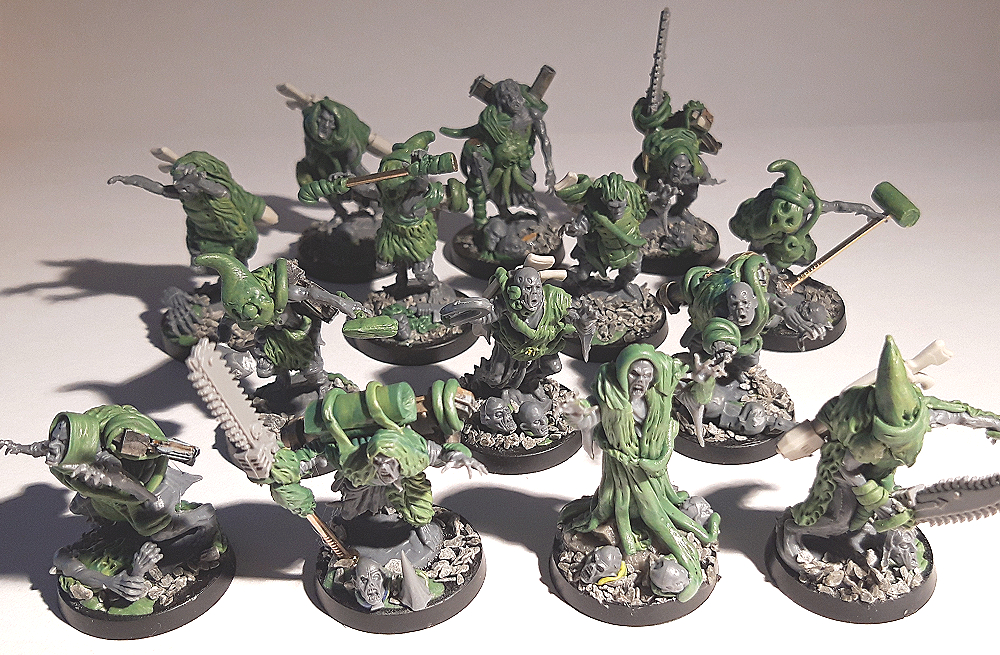 END_OF_DOCUMENT_TOKEN_TO_BE_REPLACED

I’ve started work on putting together a bunch of Cultists to use as meat / cannon fodder ahead of the advancing Plague Marines and to keep with the fluff aspect of the army. I’ve never been drawn to the GW Cultists – they fall a little too much into the muscle bound freak that leans heavier towards Khorne, and the Poxwalkers just seem off, I’m not sure if it’s the studio paint jobs or what, but I decided to look elsewhere.

END_OF_DOCUMENT_TOKEN_TO_BE_REPLACED

Plaguebearers this time – mainly a Dullcote / gloss as on previous comments rather than some of the more involved work on previous touching up. The only thing that I looked at was adding some texture via a baking soda / paint to the previous tentacles to give them more of the appearance of roots and the like. I’ve also started work on the cultists and hope to post something soon.

END_OF_DOCUMENT_TOKEN_TO_BE_REPLACED

Brief update – the second squad’s been brought up to date with the Plasma Guns – there was a lot more work involved with these than the previous squad as the previous weapon was more integrated with the rest of the model.

END_OF_DOCUMENT_TOKEN_TO_BE_REPLACED

So, the first squad of Plague Marines has been amended as necessary – changing weapons for more obvious Plasma Guns and a little bit of touching up of paint jobs and the like. I must admit the thing I’m most please with is the results from Testor’s Dullcote – I’d heard rumours of how good a matt finish it provided in the past but wasn’t really expecting it to be *that* good. Picking out elements with the gloss varnish really helps, and I’m happy with the results. END_OF_DOCUMENT_TOKEN_TO_BE_REPLACED

So, this is the first Plague Marine Squad, and generally I’m happy with the results. Happy, does not mean fully finished, although apart from two slightly larger jobs here, there’s a lot less painting required here.