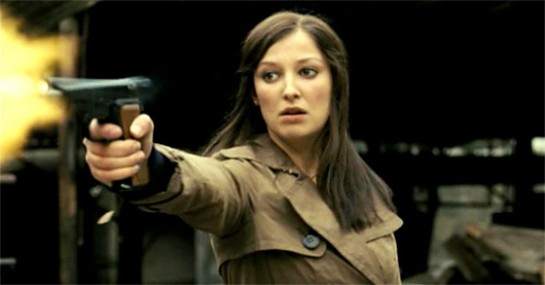 Near the end of The Baader Meinhof Complex the remaining members of the Red Army Faction take a vote as to whether they should increase the ferocity of their attacks against the German state. As each member raises their hand in turn the camera focuses in on the one person who does not. Eventually the uncomfortable silence and the stares from his comrades lead him to raise his hand but the point is not lost on him, the RAF have become the thing they fear most and the democracy they seek no longer exists.

To call The Baader Meinhof Complex (TBMC) complex somewhat understates the truth of the matter. Whilst most political thrillers (if this is a political thriller – a point I’ll return to) tend to stop every twenty minutes or so to allow the viewer a recap of what has happened and what it all means, TBMC makes no concessions. You either keep up with the plot or your lost. Characters become part of the plot with no introduction, what look like sub-plots are jettisoned without a second thought and there are no moments of light relief or comedy in its blisteringly quick two and a half hour running time. This is a film that has been made by adults, for adults and without a view on the multiplexes and the teenage demographic.

Likewise the film makes no apparent moral statement. Extremism is shown as a legitimate political tool, although terrorism (and more specifically, acts of terrorism) is vilified as an ugly truth, nothing more than criminal behaviour of the worst kind. Similarly the state is not portrayed as a fascist regime, the ferocity of their response only increasing as the RAF become more and more dangerous. Instead the film maintains a neutral tone allowing the viewer to make up their own mind as to the legitimacy of the events that happen.

Hollywood would make this as a smart political thriller, focussing on the actions of the authorities to capture the terrorists and the giving a glossy sheen to the (numerous) action sequences. Instead this is shot almost like a docu-drama, action scenes take on an almost news camera feel – especially during the early scenes involving a police baton charge. The violence is sickeningly realistic but not gratuitous – it would be difficult to tell the story without including it – focussing on the terrible things that guns and bombs do to the human body.

TBMC has much to recommend it. Certainly the performances of both Martina Gedeck and Johanna Wokalek are amongst the best you’ll see this year and writing, direction & cinematography are all excellent. However it’s not the easiest viewing experience, is frequently disturbing (a sequence involving the force feeding of a prisoner being particularly unpleasant) and lacks any form of redemptive message. The director has noted that it’s a film about Germany coming to terms with its past and that’s sort of the point, and no one is going to go to see this film without at least a passing knowledge of its content. I do want to see it again, but it’s not exactly something that I’m looking forward to. Like Taxi Driver this could fall into the category of “Once a year is enough”, I recognise it’s merits but it’s not something I’d want to experience on a regular basis.